As we get past peak production into the dryer summer months milk typically declines much faster than the cows potential. The chart shows the Fonterra Company Milk Chart for the Waikato for the last couple of seasons. The blue dots are the prediction using tracker data based on supply up to peak. 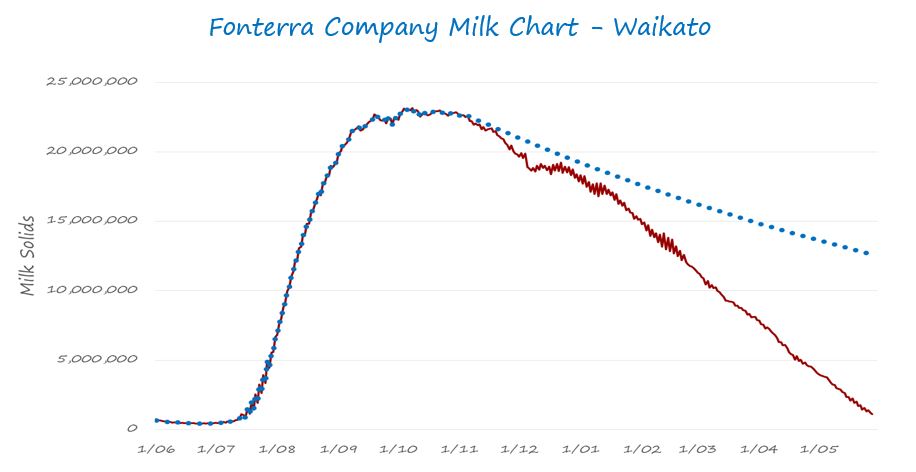 What the chart shows is that the actual decline results in 21% less milk than the prediction. For the average Waikato farm this would be equivalent to 24,650 KgMS, which at a $4.60 payout, would be worth an additional $113,427 of income. The big question is how much would it cost to maintain the actual production at the predicted level? If the gap is simply an energy shortfall the cost is relatively easy to calculate. A free calculator is available here to make things easy.

Even using 80MJ of energy to produce a kilogram of milk solids and feed at $450/t there is still a margin to be made of over $30,000 which would be like adding 21c to the payout. using 80MJ assumes that ‘kl’, the value for efficiency of utilisation of energy for lactation, is pretty poor. We would typically assume 65MJ for well managed farm systems and if the cows are fed consistently well this can be achieved.

For farmers using Trackers Dairy Costings section ‘Feed Tracker TM’ some are showing just how well things can be done.  The chart shows a Waikato farmer achieving 134gMS/KgDM. The diet cost per day is $2.58/cow leaving a margin over all feed and forage costs (MOFF) of $7.13 per cow per day for cows producing 2.11KgMS. Do you know what your FCE and MOFF are? 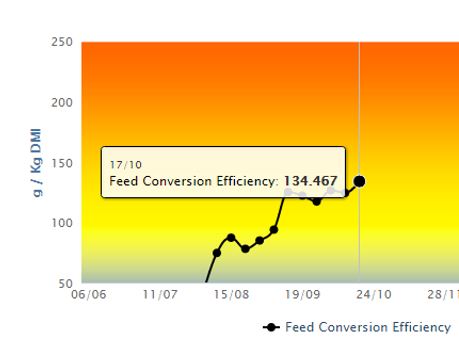