Each season Dairy Club analyses the herd testing data of a wide range of farms. Using a program designed and built by Dairy Club a predicted 305 day yield is calculated so that all the cows can be analysed against each other on a level playing field, irrespective of how many days in milk they have actually done.  These data show some highly productive cows, but also a large number that are failing to cover their costs and our herd’s longevity is slipping.

The chart below shows the data analysed as quartiles. 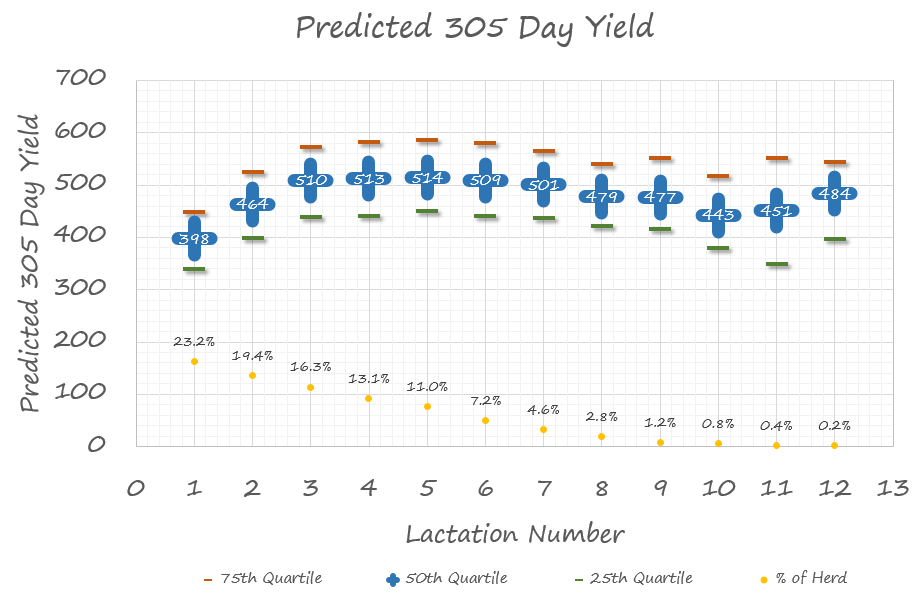 The heifers are achieveing just 78% of the yield of a 4th or 5th calver. A good target should be to achieve 90% of the yield of a mature cow. Check out Dairy Club’s ‘Value of better heifers’ calculator here. Using these figures in the calculator, the average herd could reduce cow numbers by 12% if heifers milked to target in their first lactation. This is a massive cost saving.

Analysis of the makeup of these herds shows that the average cow is only lasting for 3.4 lactations. By comparison this is lower than found in the same year by Kossaibati in the UK’s Holstein/Friesian herds at 3.7 lactations (411 day Calving Interval) with a 570KgMS average 305 day yield. These UK heifers were just under 29 months old at calving, giving them around 4 months more growing time, but are typically well over 100kg heavier than heifers here in NZ at first calving.   These data show that we need to work much harder on rearing better heifers into the herd and managing them better through their first and second lactations.

Analysis of the data from the national Economic Survey shows that the average fixed costs per cow in the 2013/14 season were around $1,600 per head.

This means that to cover this fixed cost, at a $4.60 payout, a cow would need to achieve over 350kgMS. In this analysis of herd data 11.8% of cows failed to achieve this figure.

Use your herd testing data to evaluate your policy on cow numbers and level of production. The results could show you the route to a more efficient system.

*This analysis was carried out on 13,261 animals across 35 herds and is indicative only. You are advised to undertake analysis on your own herds before making management descisions.