Comments are often made on social media state that low input grass systems are more profitable and environmentally friendly than high input systems, but are they? 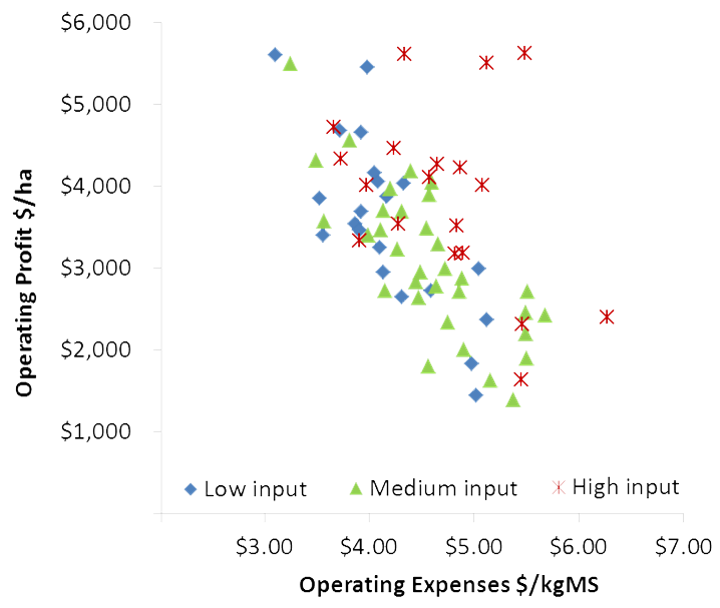 Data from DairyNZ’s Dairy Base displayed in the chart on the left shows that high input farms are just as profitable as low input farms across a range of seasons and different payouts.

These data does not show that higher input farms are less profitable, even in low payout years.

The chart on the right shows the although the higher input farms have slightly higher operating expenses, this does not mean that they have lower operating profit. 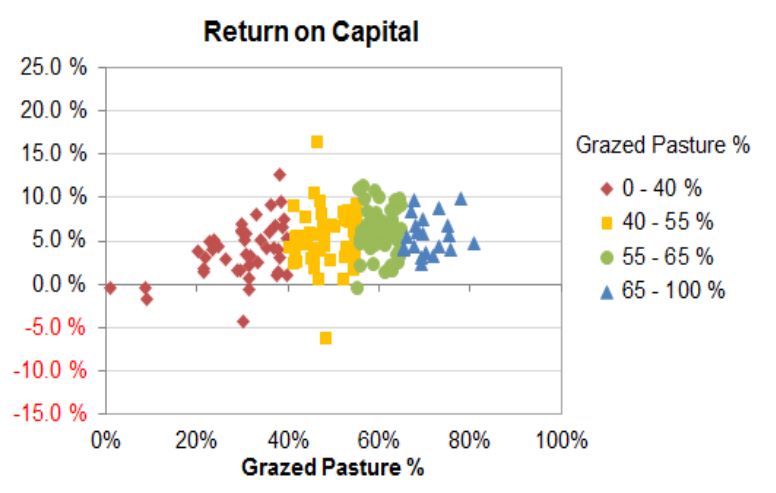 Work in Australia by Hauser & Lane has evaluated Return On Capital against the percentage of grazed pasture.

The chart illustrates the results and shows little correlation between grazing and ROC for this sample of Australian farms and that in these cases farms are no more or less likely to be profitable with high levels of grass, or low levels of grass in the diet.

The table below is taken from the UK’s MilkBench system, a detailed analysis of 322 farms. Here the farms have been divided into three farm systems. Values are in pence per litre. 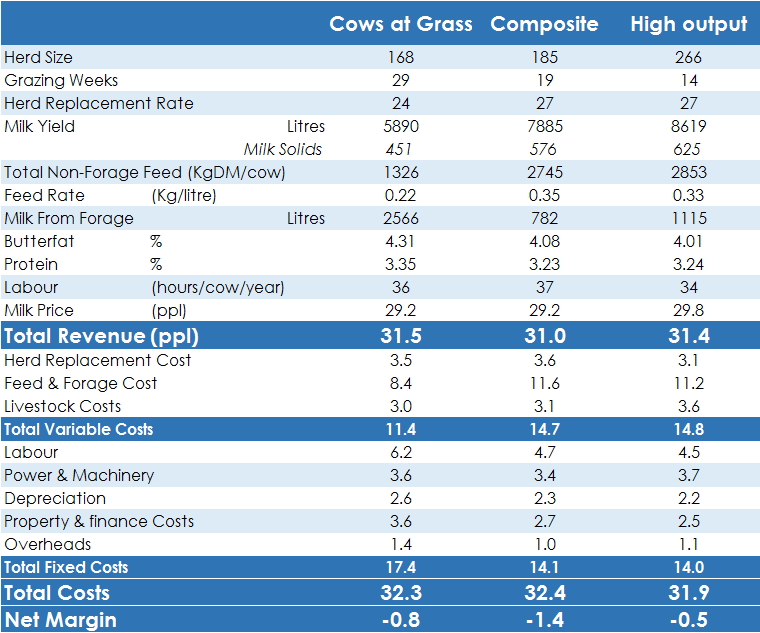 These data show that there is virtually no practible difference in total costs between grass based farms and high input farms. The savings made with lowering inputs in Variable Costs is lost through lack of dilution of Fixed Costs. Both systems end up at pretty much the same result.

Analysis of economic data typically show that the most profitable farming system is one that is done well, irrespective of feed system.

So how does the way we farm effect the environment. Is low input grass farming more environmentally sustainable than high input?

The chart to the right compares farms in New Zealand and Sweden (A. Flysjö et al. / Agricultural Systems 104 (2011) 459–469). The Swedish farms can certainly be classed as high input, as they using over 3.0tDM of grain and concentrate feed.

The Swedish farms house for 9.5 months and have a replacement rate of 38%. Cows are around 150kgs heavier and produce twice the amount of Energy Corrected Milk (ECM) that New zealand cows do.

The conclusion of the report is that “it is difficult to state with certainty that one kind of milk production system give rise to less GHG emissions than the other”.

There is significant overlap between the data sets and what the data does show is that there are some farms achieving much lower CO2e (CO2e = Carbon Dioxide Equivalent) emissions than others. 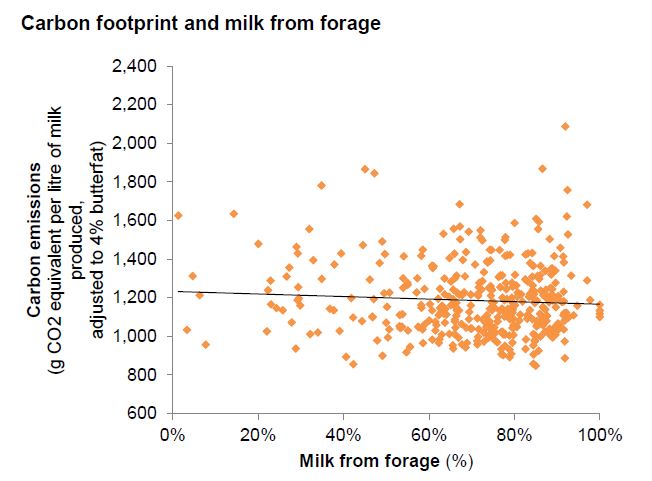 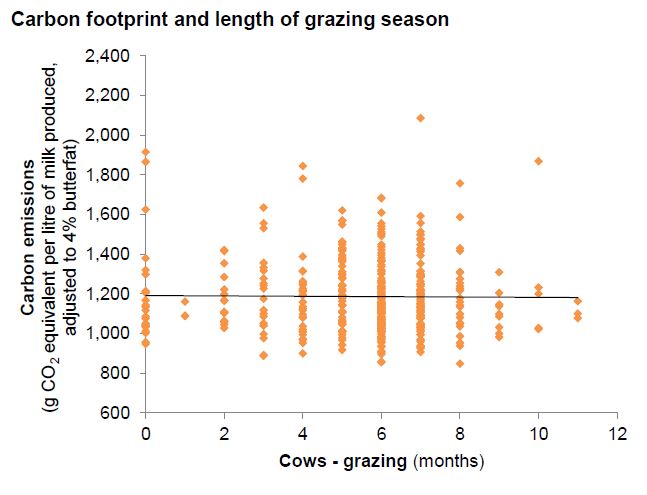 It is important to look at many sources of data. These charts are from the UK dairy industry body DairyCo.

The chart on the left shows the relationship between Co2e and Milk From Forage. These data show that there is little correlation between high forage systems and low CO2e.

Further analysis shown in the chart on the right looks at the amount of time cows are out at grass. No trend is found.

It is therefore not possible to say from these data that high forage systems are more environmentally sustainable than higher input systems.

So will feeding more grain/concentrates result in higher CO2e? The data from the same study shows a slight trend upward, but still a very poor correlation. 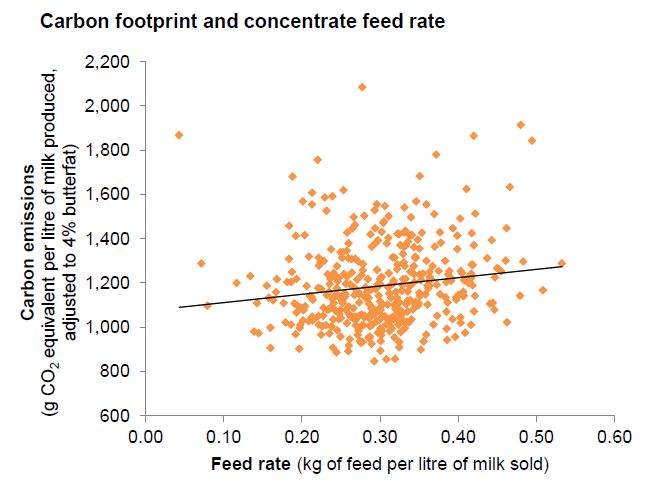 Dairy Australia in their TasMilk60 project identified a stronger correlation with increased concentrate use, but with a r2 of only 0.35 this is fairly weak. Analysis by pasture consumed also shows virtually no correlation with reduced CO2e.

So from all this analysis is it possible to say that low input grass systems are clean, green and profitable. The answer is…’no more or less than any other way of feeding cows.’